Hours after the police chief in Vermont’s largest city resigned over using a fake social media account to heckle a critic, the mayor announced that the officer acting as chief revealed she too has used a fake account.

It wasn’t just the AP using that word. Here’s WCAX:

Three police chiefs in 24 hours: That’s the story in Burlington after Chief Brandon del Pozo and his replacement both ran into trouble with fake social media accounts.

Less than 12 hours later, his acting replacement, Deputy Chief Jan Wright, was removed from her role for the use of a Facebook account under a fake name.

And the Burlington Free Press:

The chief has admitted publicly that he spent six weeks of paid family and medical leave seeking mental health treatment after creating the fake Twitter account.

…and them again, this time reposted by USA Today:

The news-media consensus seems to be that pseudonyms are “fake” and that such fakery is a damnable offense.

Meanwhile, what did del Pozo actually do with his pseudonymous account? That CNN story quotes him as calling Winkleman a “cowardly creature hiding behind an electron curtain” (because blogging is inherently cowardly or something), but for futher details you’ll have to go to Winkleman himself, who has collected a few screenshots:

Mostly, del Pozo seems to be trying to handwave Winkleman’s criticisms of the Burlington PD as “the man who is so indignant when cops curse” and trying to make the diminutive “#ChickyTroll” stick. Here’s how much impact he had: 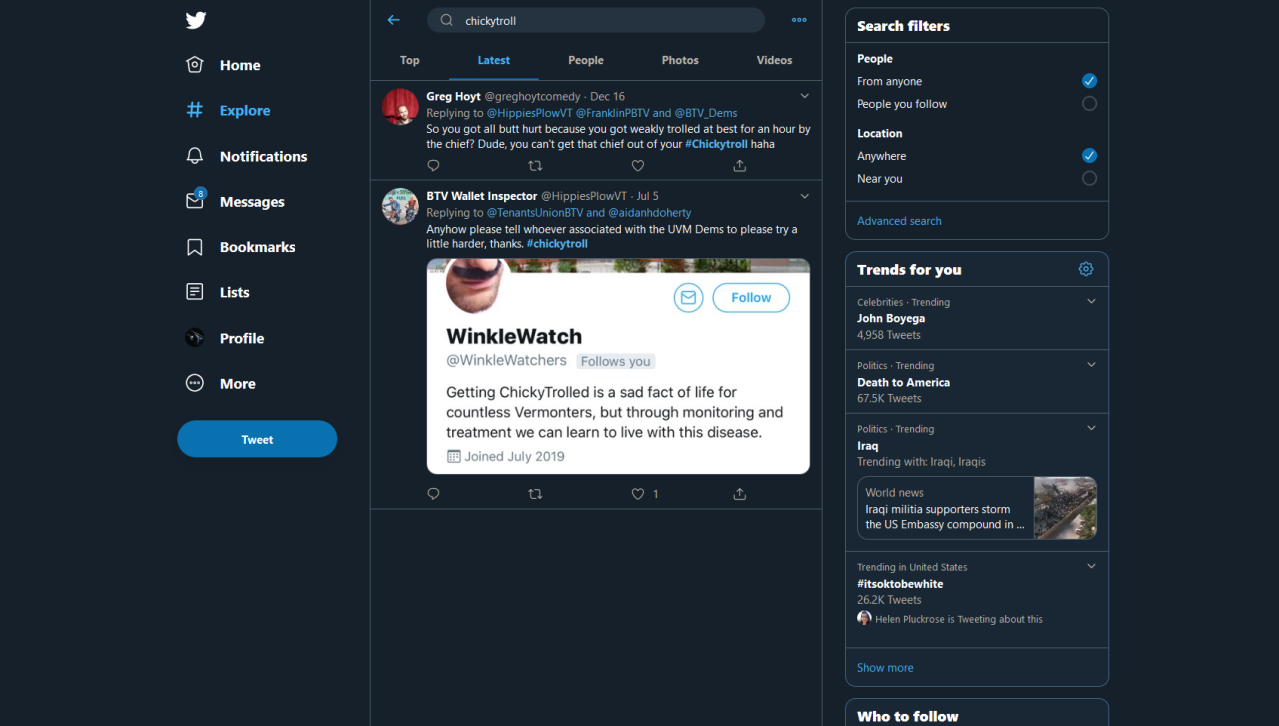 One of those two accounts is Winkleman himself, and the other is an Arizona comedian. And I noticed, in Winkleman’s screenshots, that @WinkleWatchers had zero followers…

I’m sure you’ll forgive me for not being blown away by the sheer scope and power of this official media manipulation.

When it comes to fake social media accounts, people WCAX News talked with in Burlington on Tuesday didn’t seem to have an issue with it except in the case of public officials…

I’ll go farther than that: I have no problem with pseudonyms in the first place, and I’d rather public officials used them.

In his blog post, the one with the collection of screenshots, Winkleman also describes what del Pozo is like when dealing with critics face to face:

Bullying and abusive behavior by del Pozo includes a ‘joke’ (at 3:00) about Mr Fife being ‘under the gun’, del Pozo abruptly rescinding their 18-month long agreement (15:10), and many personal, bad-faith arguments.

“Under the gun” isn’t much of a joke coming from a guy who commands 105 cops, some of whom allegedly don’t mind knocking people unconscious. So from a practical standpoint, we’re probably better off when del Pozo is using a pseudonym.

I don’t have a problem with del Pozo’s pseudonym on an ethical level, either. I’d rather that social-media arguments stood or fell on their own merits, rather than being deemed worthy or blameworthy based on who runs the accounts involved.

@WinkleWatchers is actually a good example of how that should work: it had no followers and no traction because it didn’t deserve any. I hadn’t heard of Winkleman before this story hit my local paper, but he seems to be making substantial (if typically lefty) complaints about the Burlington PD, and responding to substantial complaints with “lol chickytroll” got del Pozo nowhere even before his pseudonym was penetrated.

In summary, Brandon del Pozo was not wrong to use a pseudonym on social media. I hadn’t heard anything about him before this story broke, either, so I don’t know how much of a dirtbag he is, but @WinkleWatchers didn’t make him a dirtbag.

P.S. As of this afternoon, @RayONeillSucks is still available.